Penticton CCS tournament has been canceled ,

but Cue’s Game Room in Penticton and District Billiards in Kelowna are still open and looking forward to you playing on their Diamond tables in the New Year.

The Men’s 8 Ball tournament played this past weekend November 26, 27 and 28 at Cue’s Game Room in Penticton.  Twenty five men from Penticton, Kelowna and Merritt competed for the big cash prizes.  We understand why the players from Vancouver cancelled.  They might still be here if they’d come.  Thanks to everyone who entered the tournament and all the spectators who came to watch the action.  Like the women’s tournament each player was given a raffle ticket for prizes.

Rob Lionello won the Vee’s tickets and managed a 7/8 finish in the tournament winning $200 cash.  Hamzah won the Canucks tickets.  Hamzah, you might have to fly into Vancouver for that game.  Vicky drew the ticket for the $1100 OB Cue and Del Hiltz was the happy recipient of that draw.  Actually Lois might be even happier.  Del also had a 7/8 finish in the tournament and took home $200 cash as well.

Rick Kotowich and Jeaven Asplico (JB) managed a 5/6 place in the tournament and left with $300 each.

Tim Lezard won the A side sending Jason Spanier over to the B where Jason sent Kelly home and returned to play Tim for 1st place.  Jason would have to beat Tim in two races to 6 in order to take 1st place.  It was a hard fought battle that went all the way to the hill in the second race.  Jason Spanier wins $1000 for 2nd place.

Tim Lezard was the champion of the tournament only losing one match in the tournament.  It was a nail biter but in the end Tim took home $1500 for 1st Place.  Congratulations Tim.  Great shooting! 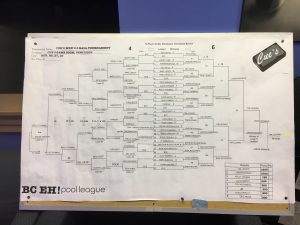 The first big tournament of the year was at Cue’s Game Room in Penticton on November 6 & 7.  Cue’s hosted the successful Women’s 8 Ball tournament on the weekend with lots of exciting play. This tournament sold out in 24 hours.  Sixteen women began playing at 10am on Saturday.  The players came from the coast, Kelowna and Penticton.    Each player was given a ticket for door prizes.

The Vee’s tickets were won by Trish Welsh who passed them on to new Penticton residents Christine and Geoff Tom. 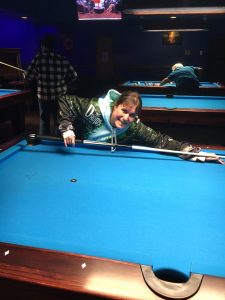 Seven women participated in the 8 ball mini Saturday night.  It only took about 6 hours to play.  Lol.  Rounds of Agavero might have slowed it down. Hahaha.  Rayleen took home $40 for 3rd place, Vicky was happy with $100 for 2nd and Ninon after much talk about her rack took home $150 for 1st place.  Thank goodness it’s rack your own.  Hahaha.  Pictures to follow.  LOL 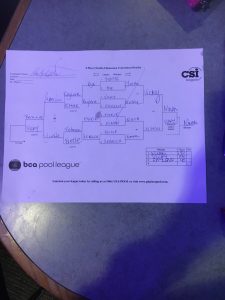 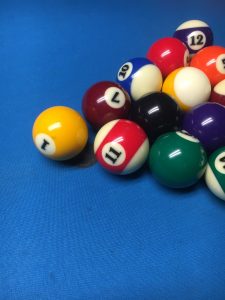 The big tournament continued Sunday morning at 11am.  There might have been a couple of big heads there that morning.

Penticton’s own Ninon Smith and Marie’s  sister Yvette Beesley,  tied for 5/6 in the tournament.  Yvette was the B side basher until she wasn’t.  No prizes for that finish but definitely bragging rights.

Coming in 4th place, visiting from the coast was Katherine Robertson winning $250.

Another player from the coast was Brenda Willis finishing in 2nd place and winning $750. 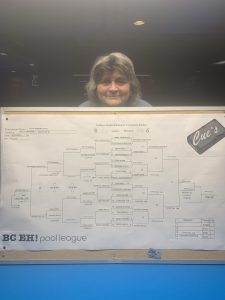 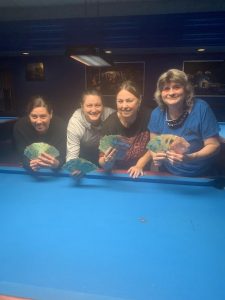